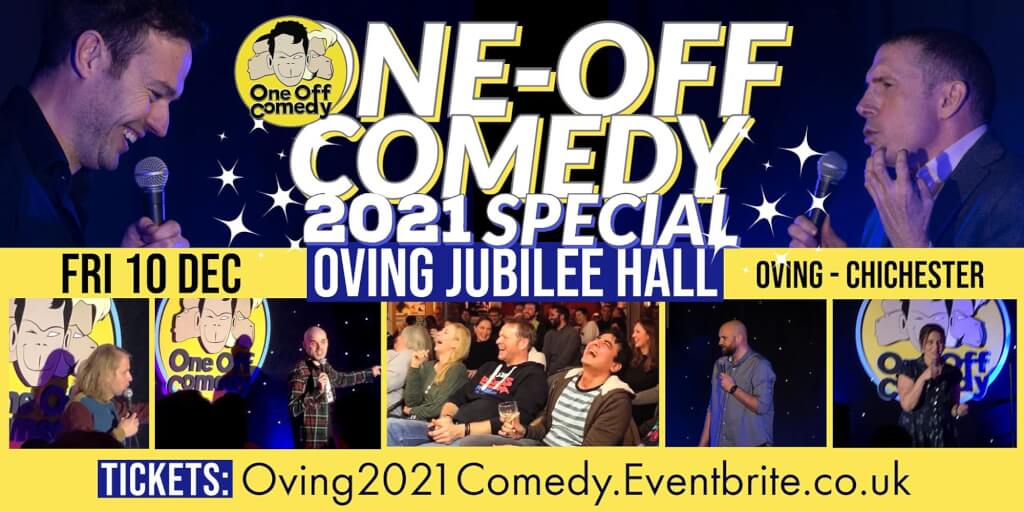 Get ready, Oving! One Off Comedy is bringing you the fun you all deserve! It’s going to be epic!!

Get ready for a hilarious & wild night at Oving Jubilee Hall!

Join our comics to wave goodbye to 2021 with a belly-aching, earth-shattering laugh!

Pairing up with the fanatics at Brewed Boy (West England’s award-winning craft beer makers), there will also be delicious craft beers, top wines and Prosecco!

So the only question is… who will you treat? <3

What people are saying: “Hilarious….I haven’t laughed that much in ages” (Claire, Cardiff)

About our headliner: Michael Hackett is a Manchester-born comedian who performs stand-up around the UK, Europe and Australasia. He’s a regular at the Edinburgh Fringe, hosted Oktoberfest to 2,500 people and released a bestseller book ‘Gobsmacked!’ Previous to this he trained as a dentist, quit French clown school and joined the circus. After a trapeze accident broke his left testicle, however, he finally picked up the mic.

Johnny Wardlow: BBC Comedy Award legend for 3 years running, Johnny has a unique style. “Undeniably quirky” says Nottingham Review. Now based in Brighton, he cut his teeth on both the UK and New York circuit including the Comic Strip Live. As a single man, unlikely to settle, he has many stories to tell and a unique view on the most bizarre points of life.

★★★ Gov Safe★★★
Don’t worry – we know Boris might lock us all down again so if this happens and the event can’t be rescheduled, we’ll fully refund your ticket.

Every show has sold out in advance so get your tickets early to not miss out!