Comedy Christmas Special at the Vineyard!! 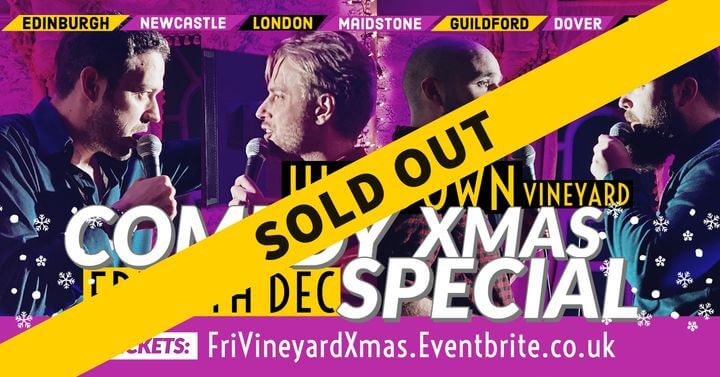 COMEDY CHRISTMAS SPECIAL at the Highdown Vineyard!!
The best of British pro comics are returning to Highdown Vineyard for a Comedy Special to remember!!
Have those Christmas laughing bellies ready! It’s going to be a wild night of hilarious fun!
Join us in the beautiful countryside for an intimate night of socially distanced comedy, drenched in exquisite wine 😀

What people are saying:
“Hilarious….I haven’t laughed that much in ages” (Claire, Cardiff)

About our headliner: Michael Hacket t is a Manchester born comedian who tours the UK, Europe and Australasia. He’s a regular at the Edinburgh Fringe, hosted Oktoberfest to 2,500 people and released a bestseller book ‘Gobsmacked!’

Johnny Wardlow : BBC Comedy Award legend for 3 years running, Johnny has a unique style. “Undeniably quirky” says Nottingham Review. Now based in Brighton, he cut his teeth on both the UK and New York circuit including the Comic Strip Live.

★★★ SAFE AND SOUND★★★
To keep everyone safe, numbers for this one-off will be limited, so get your tickets early before they sell out. Also if Boris decides to shut the country again, don’t worry, we’ll give you a full refund.