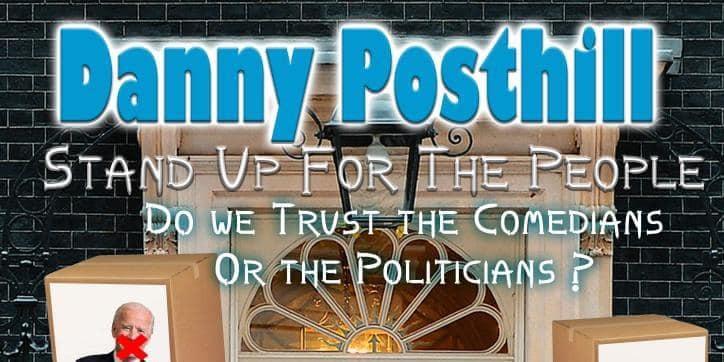 Highly acclaimed comedian and impressionist Danny Posthill joins us as part of his tour of the preview of his 2022 Edinburgh show!

Danny Posthill is a comedy Impressionist, and his versatile act caters for all walks of life with unbeatable stand-up and a string of impressions, such as Alan Carr, Michael McIntyre, Sarah Millican and President Donald Trump, alongside all the other topical political characters of today. Danny has performed all over the world, working around the Mediterranean and South America, plus taking his ‘Donald Trump act’ far and wide, performing at events from London to Singapore. His Tv Credentials include ‘Pointless Celebrities’, where he appeared alongside fellow impressionists Alistair McGowan, Rory Bremner and Jon Culshaw. He also starred as “Donald Trump” in a spoof rap battle against “Hilary Clinton” for sky news. Finally, not forgetting Danny’s outstanding performance on Britain’s Got Talent, in 2015, where he reached the Grand Final. Danny is a regular headline act at comedy clubs across the UK.

Since his first sell-out Edinburgh show “That Bloke Who Does Voices” Danny Posthill has decided to put the world to rights with a new show “Stand Up for the people”. Some of you may know that in Luxemburg their Prime minister is a comedian…..well, Danny thought how good would that be if it happened in this country? from Michael McIntyre putting fines in place to people who hand mugs of tea over non handle way round, to Alan Carr being the minister of transport, Lee Evans dealing with the foreign affairs and eventually having a cabinet full of comedians that would make our world a better place. Come and check out this work in progress show, for one night only!