Declan McKenna and Will Joseph Cook in Worthing 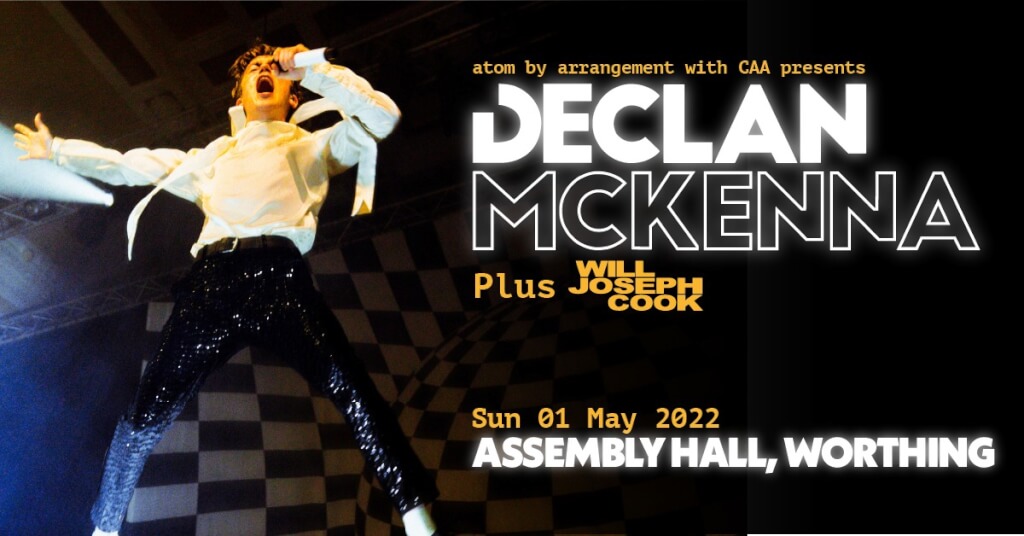 Declan McKenna and Will Joseph Cook in Worthing

In late 2019, Declan Mckenna headed out to Nashville to record his second album, Zeros, with producer Jay Joyce. By September 2020, he was battling out for a number 1 record with The Rolling Stones. “Nashville is a great place to record because it’s filled with a lot of creative people and music heads trying to escape LA.” This idea of a refuge is fitting for Declan, who wanted to be away from the pressures of London or the drab consistency of home, allowing for an intimacy and a desire to explore on this super galactic album that can only really be pursued in a place that is unfamiliar. Zeros is playful, wonderfully strange and intensely musical, but there’s a dark shadow looming throughout. It’s Coors Light and cowboy boots escaping a Silicon Valley dystopia.

Whilst Declan might have lost that particular battle by a whisker to Jagger and his cohorts on the very last day of sales, it showed just how far Declan had come since his arrival as a slight in stature, big ball of fizzing teenage energy only a few years earlier. The boy most likely to had very quickly become the young man to beat.

But for all the chart noise and colourful media presence, it’s the music that does the lionshare of the talking. Zeros is a curious, unique and bold record that is teeming with fresh ideas and nods back to eras that have no right to head up the charts in the year 2020. It’s a very British trait to focus on age, but it simply has no right to be conceived by a twenty one year-old who was younger still in its writing. Opening track, You Better Believe!!! comes in hot, aggressive and excitable. It’s a mean song, its accusational. You’ve changed. You’re gonna die. The world’s gonna end and everyone is going to forget you. It combines a retro, 70s space-race inspired energy with a modern tale of anxiety. Musically and lyrically, it provides a perfect blueprint to the album: ‘So you know how it feels to wait at Heaven’s gate for God,/ Watching your requiem on a screen… I’m sorry my dear,/ The Asteroids here.’ “I began to understand where I was strong with lyrics. Something that frustrated me with the last album was people relying on buzzwords, even though my songs were never just about one thing, so I began to consciously write these more abstract narratives. I wanted to make a story out of it instead of enforcing too much of one idea into a song.” Rather than allowing contemporary culture to explain away the record, we’re challenged by Declan’s kinship to the surreal, something closely connected to his inherent aversion to definition.

Be An Astronaut follows, a clear nod to Bowie in its pure operatic magic, “and also a big nod to The Waterboys and an accidental nod to Angels by Robbie Williams.” Being brought up a Catholic and then coming of age during the environmental crisis makes for an obvious tension between the idea of forgiveness or consolation and having to take responsibility for your own actions and failings, right here and right now on Earth, “rather than looking up to the skies”. It’s fitting then, that this song simply appeared to Declan one day, almost fully formed, but whether it fell from Space or fell from Heaven its immaculate conception is like an answer to the question you’ve always asked. And yet, the answer isolates you further, pushing you deeper into the unknown:
‘Those boys tell you what to do all the time,/
On and later on you said I can just be what I want/
And they said you’re lying,/
Well you were born to be an astronaut,/
And you’ll do that or die trying’/
It’s a song about being pushed to the periphery, because in the age of the internet you can always be an outsider, even if you’re not the stereotypical outsider: “Its ‘normal’ vs ‘normal’, depending on what your definition of ‘normal’ is, and so you can’t win. Be An Astronaut marks a conversation that’s foreboding that loss or death or whatever it may be, because it’s never just one thing.” It’s the beginning of the end: be it Bowie or Angels, Science or Religion, neither can save you now.

“In terms of my artistic development, it feels a major step on from my first record! With this album, if I’m performing as a character, I wanted it to give it everything- all the artists that I love like Dylan, Nick Cave or Bowie, are great storytellers because they give their characters really intense, sometimes strange voices.” So Declan tends to encapsulate both a very human psyche and a more absurd, dystopian future, whether it’s the tongue in cheek You Better Believe!!! ‘We’re gonna get ourselves killed/ What do you think about the rocket I built?’ or the more harrowing Twice Your Size, “The Sun will melt what it can touch… / And wouldn’t that be so nice/ listen to the man online for his good advice/ cut your hair cause it’s full of lies.” This small discrepancy is why we can connect to Declan’s songs so effortlessly, because while they stand as a reflection of our own culture, they do not stand alone in this way, they are also the warped carnival mirror- funny, bizarre, otherworldly but always close enough to see a familiar face staring back.

Similarly, Beautiful Faces pokes fun at this un-reality. An anthem for a doomed youth, it is about young people in the modern world and how intimidating it can be. How scary it is to see so much and feel as though you’re doing so little “so I wanted it to be a big song… Scary big. It very much relates to now, but I wanted to reimagine social media in this future-sphere where it has become even more immersive so that we cannot see where it ends and we begin.” It’s a song about aesthetic beauty – literal beauty- but also the false power we give to people and relinquish from ourselves. It’s purposefully vague because we project our own anxieties onto it, in the same way that we allow these vapid exchanges with one another to metamorphosise into monsters that don’t actually exist, but to us they actually do.

Daniel, a name that appears on two tracks, feels like one of these innocent victims, lost and pushed to the periphery within this desolate, destructive world the album has created. “You know, ‘Daniel Is Still A Child’ because he’s lost in the aftermath, whether it’s lost in the sauce, stoned, lost in some existential fear or lost his way in some VR game. Daniel is this kid who has so much to prove, he has so much in him but he’s just continually being led astray because the world’s telling him that he’s not ‘normal’.” ‘Daniel’, it seems, exists as more of an idea than a person, an emotive floating figure, equipped with a laser-beam synth line and funkadelic, bassline- a cheeky wink at those cheesy 70s TV shows set in outer space, all oversized collars and hairy chests. “Social media isn’t this alien spaceship, it’s the reality in which young people are living in. And I found myself living in this reality. I’m not trying to create a story that’s like ‘bleep bloop isn’t the future mad’ we’re living in that madness now!” This is why Declan’s musical playfulness and lyrical humour in the face of all this destruction is so integral to the sound and feel of the record, and why these abstract characters are the only thing that Declan believes we can truly connect with in a world where fiction and nonfiction are “one and the same.”

The truth can be absurd: just as funny as it is scary.

Ending on Eventually, Darling allows Declan to encapsulate this feeling of departure, and with it he brings the ambiguous finality that the entire album has been foreboding to a dramatic, anthemic head. Guitars and all in overdrive: “Whether its a death or whether its someone leaving or getting lost or being abandoned, people give up and people change or the world and society changes and we can’t change with it, but we act like we’re trying.” These new-age platforms have created a (cyber)space where we are all united in the face of pain and suffering and disaster but our reality does not reflect that. In actuality, we all feel anxious, unloved, alone, and in a way that’s okay, as the song goes: ‘It was nice to meet you,/ For Love is but a fleeting friend/ we’ll end up alone oh we know/ How easy it is to pretend.’

An entire generation has been born into a world where there seem to be multiple realities: social media, fake news, post-truth. But another reason for this alienation comes from the helplessness felt being born into a mess they did not create. The unshakeable confidence and boldness of Declan’s voice and the stories he tells allows these songs to truly land; setting the tone for a world-building album, and this new world builds just as the world we know ends. His expansive, experimental structures and loss of inhibitions builds more than just a world but the entire sky and all the stars within it. These tracks and their characters are in constant conversation, they are subtly self-referencing, mature, complex and at times life-affirming but always unafraid to laugh… and Declan Mckenna is laughing hysterically as he pushes the big red button

Will Joseph Cook is one of the UK’s brightest young talents. Now 22 years old, Cook has been developing his multi-dimensional approach to crafting infectious songs since he was just 14. Finding inspiration in everything from the youthful indie charms of MGMT, Vampire Weekend and Darwin Deez to the post punk art pop of Talking Heads, Orange Juice and Gang of Four.

In 2017, Will released his debut LP ‘Sweet Dreamer’ to critical acclaim and featured in The Guardian’s data-driven poll as the 3rd most tipped artist across all tip lists. ‘Bursting with energy & charm’ and ‘infectious melodies’, its success has been attributed to his unwavering honesty of portraying systemic problems through song writing, gaining well deserved attention from NME, DIY, DORK, Clash, The Fader and Wonderland with playlist support from BBC R1, 6-Music & Radio X. To date, he has amassed over 50 million streams worldwide across all platforms.

Will has taken his high-energy live show worldwide, culminating in sold out shows at London’s Omeara, Heaven, and the Electric Ballroom. He has also performed at high profile international festivals including Glastonbury, Reading & Leeds, The Great Escape, Boardmasters, Victorious, Secret Garden Party, SXSW, Reeperbahn and has toured with alt-J, Everything Everything and Sundara Karma.

Will’s second album Something to Feel Good About’ will be released on 27th November.