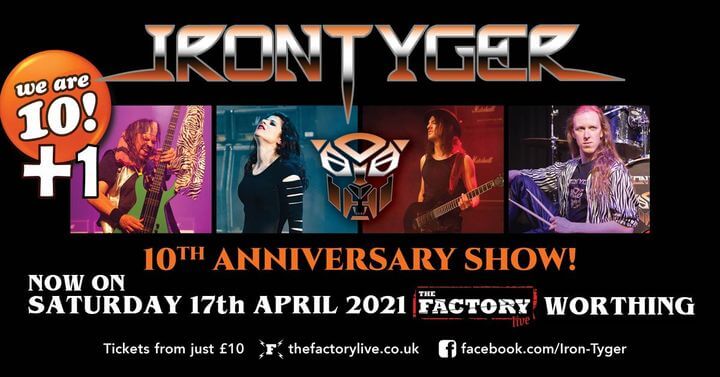 REVISED ANNOUNCEMENT – STILL THE PARTY OF THE DECADE!

On Saturday 17th April this year we will have been on the road for over a decade. You are invited to celebrate with us at a Tyger show, the likes of which you will never see again.

Roz, Marcus, Jonny & Trev will be joined on stage by members of the band from the last 10 years. There will also be VIP guests from the music industry, including key venue owners, festival directors and record company executives.

For those want to party just that little bit harder, an exclusive after-show party where you can celebrate with all the players and the band, talk about the new album, and tell us about your favourite songs and shows over the years.

We want to offer everyone a helpful choice of tickets, and ticket prices. Your 3 options are –

The show will be at The Factory Live in Worthing, which is central to the majority of our fans in Sussex – and easy to get to, and home from, by Train, Bus, Taxi & Car.

For those coming from further afield, or who are in full-on party mode, we are currently negotiating some exclusive B&B rates within staggering distance of the venue.

We want so much for ALL of you to come to this remarkable event, and have a great time with us, so book some tickets, if you haven’t already, and if you have tickets for the show when it was originally in April 2020, then you are sorted! They are still valid, and as you can see, the programme hasn’t changed.