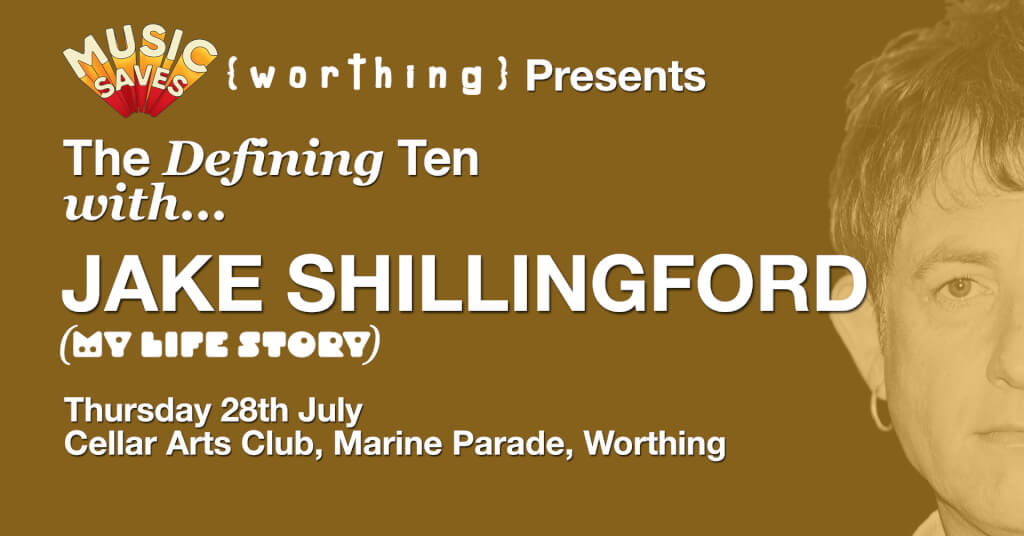 The Defining Ten is where an artist/creative is invited to take us on a musical dot to dot journey of the tracks which have led them to who they are today. These could be the first song they have a memory of, first purchase, first song they learnt to play, the track which opened doors, the track which closed doors, a track which inspired and lead to a new musical direction – so expect a variety of tracks from themselves and other artists. These tracks will be played in turn – either from vinyl, cd or streamed – and discussed with the artist. The evening will end with a unique performance and chance to meet the artist afterwards.

On Thursday 28th July we bring an icon of the Britpop era back to Worthing – Jake Shillingford of My Life Story.

My Life Story and their creator, composer and frontman Jake Shillingford are a pioneering force in the Britpop movement, scoring six UK top 40 singles, a top 40 album and inspired the era’s orchestral identity. Having been signed to Parlophone and Andrew Lloyd Webber’s It Records the band collabo-rated with a number of artists, notably Marc Almond, The Specials, The Pogues, The Wonder Stuff, Giles Martin, Morrissey & Siouxsie Sioux.

The band performed on Glastonbury’s Pyramid stage, Reading Festival (four times) and at many oth-er major European festivals. They supported Blur, Pulp, The Wonder Stuff and are one of the only bands to headline over Oasis.

My Life Story regularly tour the UK, have just released their first singles collection spanning 27 years, (featuring all 18 of their commercially released singles) and are currently writing their 5th album in Brighton due for release next year published by the legendary label Mute.

We’re very excited to be going on this journey with Jake and after hearing and discussing his Defining Ten we will be treated to a special acoustic performance . He will also have the new singles collection available to buy and sign on the night, or if you can’t make it along you can still purchase a signed cd with free delivery in the Worthing area.

As always, our events plant trees – for every ticket bought we will plant a tree with onetreeplanted.org