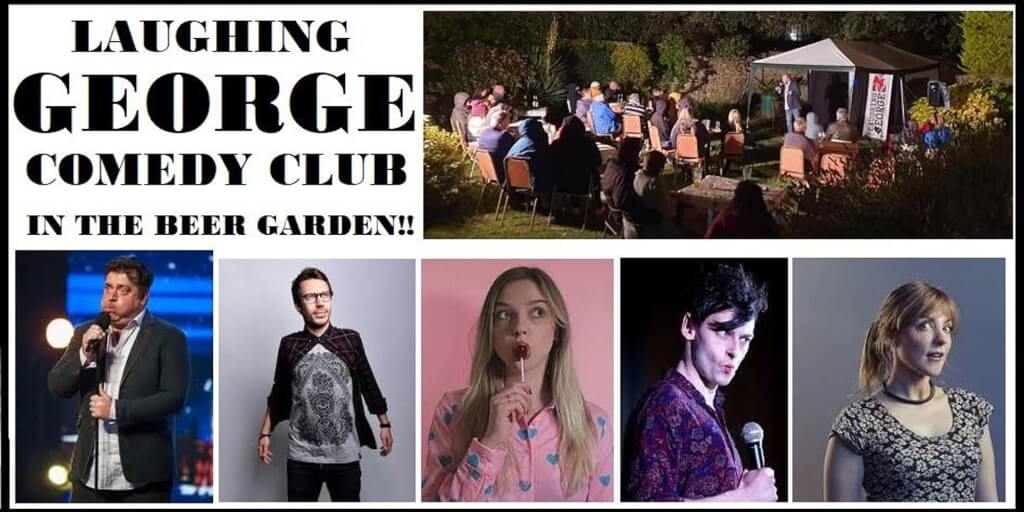 Laughing George Comedy Club is BACK!!!!
In the open air in the beer garden of The George Inn, Felpham.
Come and laugh your sandals off!!

WE ARE BACK!!!
Laughing George Comedy Club welcomes you back this Summer with an amazing night of live stand up comedy in the beer garden of The George Inn in Felpham, Bognor.
CLOSING – NICK PAGE – “The very best story teller on the comedy circuit” Rhod Gilbert. English Comedian of the year 2017- Winner. BGT Finalist 2018. Awarded Operational service medal 2014 by British Armed Forces after numerous gigs in warzones. Nick has had sell out shows at the Edinburgh Fringe and has performed in over 100 countries.
OPENING – TOM DEACON – BBC2’s The Rob Brydon Show, Dave’s One Night Stand and ITV2’s Fake Reaction.. “A mighty fine comic” The Guardian.
MC – AIDEEN MCQUEEN – Aideen McQueen is one of the brightest sparks in the new generation of Irish comics. She’s sassy, sexy, saucy and side-splittingly funny. In 2019 she had two sell-out shows at the Edinburgh Fringe.
MIDDLES –
KEVIN O’CONNELL – Kevin is a small Irishman in shiny boots who tells jokes. He was a finalist in both the Bath Comedy Festival New Act of the Year, and in the prestigious NATYs (New Act of the Year) in 2018. In 2019 he was featured on Union Jack Radio’s One Night Stand.
FREYA MCGHEE – A self-deprecating style matched with a determination to seek revenge on ex boyfriends, McGhee’s relatable style ensures a chemical bond with all audiences.