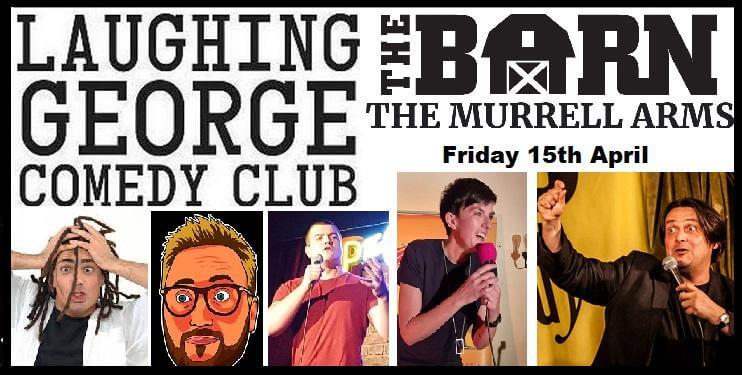 Come and join us for a fantastic night of proper laughs, as we open Barnham’s very first comedy club!!

After running for almost 5 years in Felpham, Laughing George Comedy Club brings its fantastic renowned pro comedy club to an additional venue in Barnham. The Barn @ The Murrell Arms opens its doors after it closed as an auction house over a decade ago. We cannot wait for you to enjoy this wonderful space again and hope the local community love the opportunity to come and see top-level comedians from London and beyond right here on their doorstep!

OPENING – KATE MARTIN – Confident, high energy storytelling, which she combines with razor-sharp observations of life’s quirks through queer eyes. “effortlessly funny – easily one of the best acts on the circuit – book her, she’s damn funny!”.

MC – STEVE HILI – We get Steve back time and time again as he delights our audiences with his razor-sharp wit. Steve is a fun, high-energy Mediterranean smart-arse, merging his sunny island roots with his cheeky London wit. Equally confident riffing off an audience or sharing an OTT story, Steve has the energy to lift a room and leave it gasping for more.

JOSH FAULKNER – Josh Faulkner began performing stand up comedy in June 2016 and has been on a roll ever since. Bringing his unique brand of humour with anecdotes of his somewhat interesting life to audiences across London, Josh plans on bringing his take on life across the British Isles and then conquering the world.

DAN MADELEY – Local lad who went to school with my daughter (now 27 so not so much a ‘lad) heard he was doing stand up comedy now so checked him out and what do you know, he’s funny!