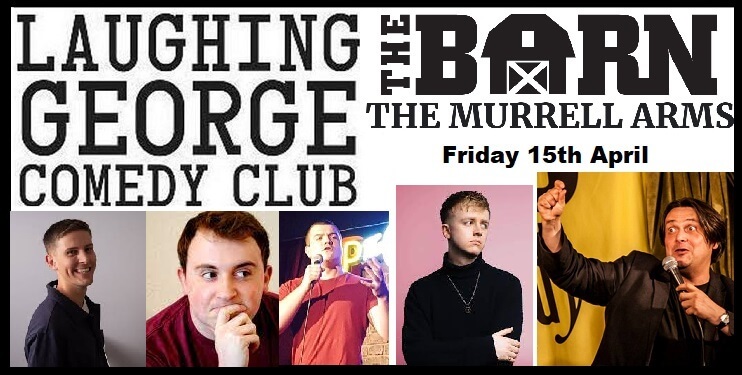 Come and join us for a fantastic night of proper laughs, as we open Barnham’s very first comedy club!!

After running for almost 5 years in Felpham, Laughing George Comedy Club brings its fantastic renowned pro comedy club to an additional venue in Barnham. The Barn @ The Murrell Arms opens its doors after it closed as an auction house over a decade ago. We cannot wait for you to enjoy this wonderful space again and hope the local community love the opportunity to come and see top-level comedians from London and beyond right here on their doorstep!
CLOSING – ALAN FRANCIS – Channel 4’s ‘So You Think You’re Funny’ winner Alan Francis has a comedy pedigree that includes Alistair McGowan’s Big Impression, Fist of Fun, Alan Partridge, The 11 O’Clock Show and Psychoville.
OPENING – DANIEL FOXX -Daniel’s comedy sketches have earned him a large online following and millions of views on social media, quite literally a TikTok sensation. Semi-Finalist of the BBC comedy awards 2021. “FUNNY AND FILTHY” … GRAHAM NORTON …
MC – MICHAEL MAY – Michael is one of the most exciting new comedians on the UK circuit. Already a regular MC up and down the country, Michael’s unique take on the world is a hit with audiences everywhere. Undeniably, one to watch!
MIDDLE ACTS;
JOSH FAULKNER – Josh Faulkner began performing stand up comedy in June 2016 and has been on a roll ever since. Bringing his unique brand of humour with anecdotes of his somewhat interesting life to audiences across London, Josh plans on bringing his take on life across the British Isles and then conquering the world.
DUNCAN ADAM – has been making waves on the South Coast comedy circuit for the last few years now, and is making a name for himself with his sharp writing and engaging anecdotes.