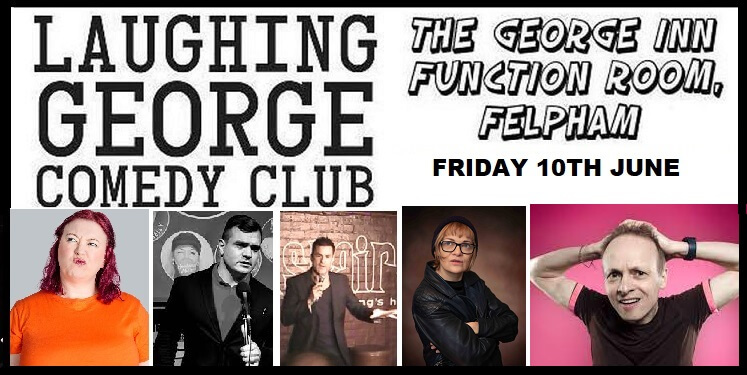 We are running a week late this month due to the jubilee weekend, come and catch some of the best comedians on the circuit!

CLOSING – STEPHEN GRANT – “The kind of comedy vision that can see round corners” Chortle. Stephen Grant is one of the UK’s funniest, hardest working and most respected comedians. Whether entertaining full-size theatres, voicing animations, warming up TV audiences, presenting radio shows or hosting corporate award nights Stephen never fails to pull in the laughs.
OPENING – DAN KIELTY – Before taking to the stand-up stage Daniel Kielty misspent a lifetime. He brings his experiences as a Boxer, a Hairdresser and a Bailiff, together with a wry smile. He’s twice married, once divorced. Father to a young daughter, Son to an elderly mother and brother to an overweight Sister. He’s dyslexic and has a poor sense of direction. All this makes looking at the world through his eyes very funny. He’s optimistic, charismatic and refreshing.
MC – NATALIE DURKIN – As seen on The John Bishop Show, Natalie Durkin is a bubbly, anecdote-driven comedian. Her exuberant observational style gives her an excuse to talk about her pansexual love life without being asked if she’s pregnant. With potential musical outbursts and unashamed ‘Northernness’, Natalie is bringing her love for gravy and Greggs along with her to WAP.
“Effervescent” – Reviews Hub
“Original, confident, full of unexpected punchlines and very funny.” – Ben Van Der Velde
MIDDLE SPOTS –
JOSH FAULKNER – Josh Faulkner began performing stand up comedy in June 2016 and has been shocking audiences ever since with his blend of ‘jokes’ that can only be described as “just wrong”. A “So You Think You’re Funny” Semi-Finalist in 2017, Josh has shared the stages of the biggest clubs around with acts including Gary Delaney, Brett Goldstein, Harriett Kemsley & Bobby Mair.
SALLYANN FELLOWES – Sallyann is a self-diagnosed weirdo. She’s neurodiverse, utterly mystified by the world she inhabits, and sure as Haribo doesn’t get the human race. She’s the most likely person to fall over nothing or get lost in a toilet. Finalist in the 2NORTHDOWN New Act Competition 2021.

ALL SHOWS DOORS OPEN AT 7.30 PM, THE SHOW STARTS AT 8 PM.
LOOKING FOR SOMETHING DIFFERENT TO DO ON A FRIDAY NIGHT? Laughing George Comedy Club is an independent comedy club based in Bognor Regis.
We have been running since April 2017 and our shows generally sell out well before the night, so we highly recommend booking early to avoid disappointment
Come on down and enjoy an evening of laughter at our monthly cosy comedy night based in the first-floor function room of the 15th Century George Inn. Shows run on the first Friday of every month.
The 2.5-hour show features some of the best professional and newcomer comedic talent from London and the South East, many of our headliners already have Jongleurs, Komedia and The Edinburgh Comedy Festival under their belt!
FAQs
-Are there ID or minimum age requirements to enter the event?
Minimum age 18.
-What are my transportation/parking options for getting to and from the event?
There is a small car park at the venue, and bus services are very nearby.
-Is food available?
If you wish to book a table for food at the bar/restaurant downstairs to eat before the show please call 01243 824177. Food is available all day so arrive as early as you like! Discount on food for comedy night ticket holders.