Light Of The World + DJ Jeff Powell for an unforgettable night of Jazz, Funk, and Soul! 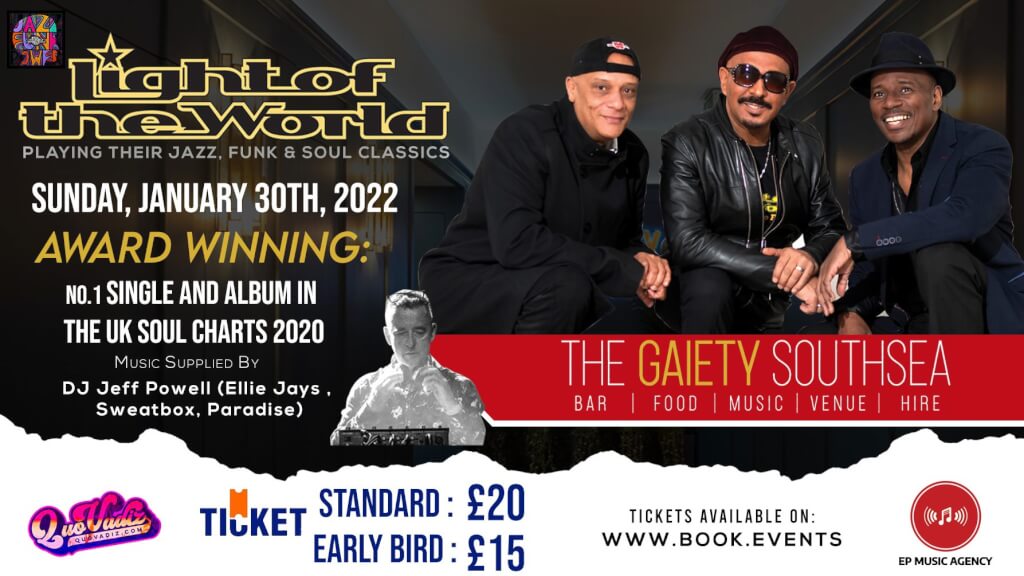 What a wonderful day and age we are living in!

The jazz-funk legends Light Of The World are about to bring to you an unique opportunity to experience the true sound of the 80s. The authors of all-time hits such as London Town, No1 Girl, Time, This Is This, and Swingin’, will breathe life into those classics onstage at the magnificent venue on South Parade Pier in Portsmouth: The Gaiety Southsea.

The band, consisting of Gee Bello on lead vocals and percussions, Nat Augustin on guitar, and Mel Gayno on drums, easily prove that they still have a lot to bestow to the world of music.

Their recently published album Jazz Funk Power features memorable songs with a huge potential of becoming ageless hits. Temperature’s Rising has become a #1 single on the UK soul charts, and the album very soon joined the throne. Their fans should never miss a chance of hearing Soul Reflections, Heart To Heart, Summer Girl, and Head Over Heels, especially live, as those songs flawlessly take the listener in and then make him dance to the beat only the drummer of a world-class caliber such as Mel Gaynor can create. Deep and emotion-laden lyrics perfectly suit the songs’ melodic lines.

Jazz Funk Power is a masterpiece that simultaneously draws into the roots of Brit jazz-funk scene, and yet firmly stays ahead of its time, to its meticulously carved details in arrangements and production. The executive producer of the album is the band’s heart and soul, Gee Bello, while Nigel Martinez signs as the producer. He is known for working with household Motown acts and is associated with names such as George Benson, Herbie Hancock, Rufus, Kool & The Gang, and Maurice White.

Jeff Powell is a local, Portsmouth-based DJ, promoter, and artist manager whose former DJ residencies included Ellie Jays, The Sweatbox, The Boulevard, Scandals & The Paradise Club. Back in the days, Jeff and his brother Gordon used to promote invitation-only shows at 5th Avenue, working with some of the UK’s finest jazz, funk, and soul artists, such as: Loose Ends, David Grant and Jackie Graham, Micha Paris, Sister Sledge, Edwin Starr, D-Influence, and Jocelyn Brown. Jeff has also worked in the studio with Roy Ayers, Kenny Thomas and Jocelyn Brown and will be bringing a setlist of jazz-funk classics before and after Light Of The World live show.

As an genuine music lover of the 70’s 80s Jazz Funk Soul scene, Jeff says that he cannot wait to support Light Of The World who are one of his all-time favourite bands. Jeff, Plus Special guests (To be announced) will provide the music prior to The Light Of The World performance and afterand promises to play some all-time classic from the likes of Luther, Chaka, Loose Ends, Lonnie Liston Smith, Hi-TensionGil Scott Heron and many more.

They promise festive vibes that will make you get up to your feet and dance, warm up for the band, and then keep the good energy going until late hours of the night.