Live Music at The Factory in Worthing 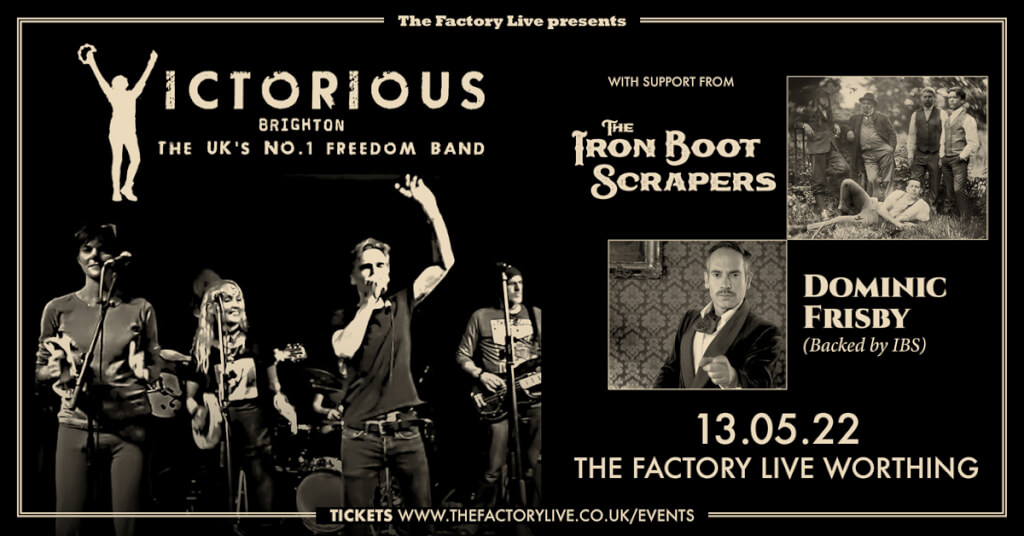 Live Music at The Factory in Worthing

THE IRON BOOT SCRAPERS
“An Edwardian Rock band transported to the 21st Century, The Iron Boot Scrapers meld the Music Hall of the 1930s to the Rock of today.

Using Edwardian period instruments, they foray out into the musical establishment to create their own, and unique sound.”

According to the Times Dominic Frisby is “outstanding.” The Telegraph says he’s “excellent.” The Spectator says he is “mercurially witty”. Even the Guardian admits he “can be entertaining”.

Dominic is a comedian from London known for his unacceptable songs, the most famous of which, Seventeen Million F*ck Offs, reached number one on the Amazon charts.

Other favourites include Hate Speech, Gammon and Proud and the Libertarian National Anthem. He has released three albums and his YouTube channel gets millions of hits.

He is the veteran of many Edinburgh Festivals and a well-liked and respected MC having played all over the country and indeed the world. Currently, he is a resident host at London’s oldest club, Downstairs at the King’s Head, and its grooviest new night, Comedy Unleashed.

Dominic has also been for many years a successful voiceover and, among his many credits, he is the voice of Werther’s Original “Each one lovingly made in gold” and Harpic “like a new loo every time”.