One Off Comedy 2021 Special 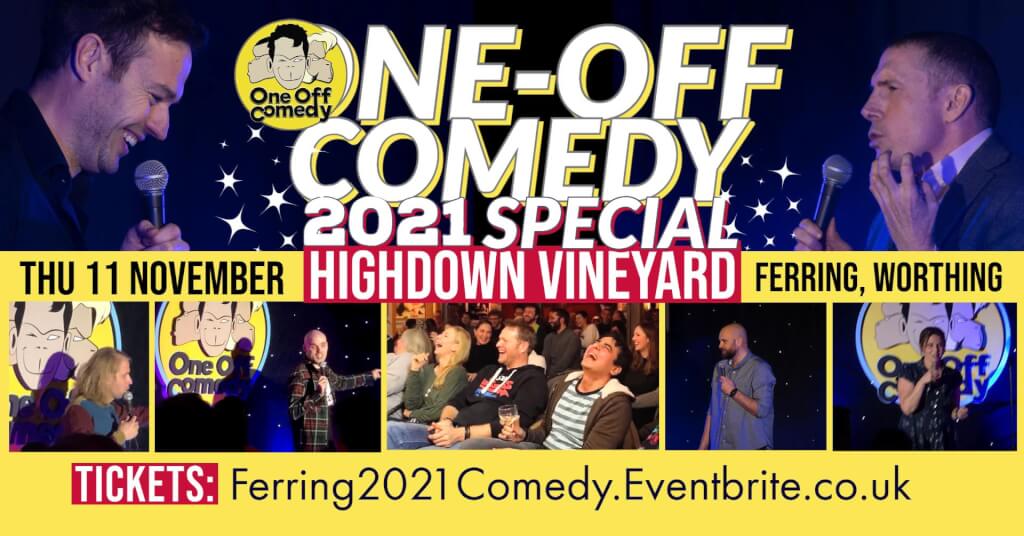 Our comics are returning to Highdown to give you the best show to say goodbye to 2021! A hilarious, epic special to remember!!
ONE OFF COMEDY 2021 SPECIAL at HIGHDOWN VINEYARD!!

The best of British stand up comedy are returning to Ferring, Worthing, to celebrate the end of 2021 with the most epic show ever!

After Friday and Saturday’s sell out, get your tickets early to not miss out!

Because there’ll be nothing better than having a laugh and some delicious wine at the delightful Highdown Vineyard to wave goodbye to 2021.

Get ready to party and be spoiled with fun!!

What people are saying:

“Hilarious….I haven’t laughed that much in ages” (Claire, Cardiff)

About our headliner: Michael Hackett is a Manchester born comedian who tours the UK, Europe and Australasia. He’s a regular at the Edinburgh Fringe, hosted Oktoberfest to 2,500 people and released a bestseller book ‘Gobsmacked!’
Johnny Wardlow: BBC Comedy Award legend for 3 years running, Johnny has a unique style. “Undeniably quirky” says Nottingham Review. Now based in Brighton, he cut his teeth on both the UK and New York circuit including the Comic Strip Live.
Plus two mystery guests!
Venue: Highdown Vineyard, Littlehampton Road, Ferring, West Sussex BN12 6PG