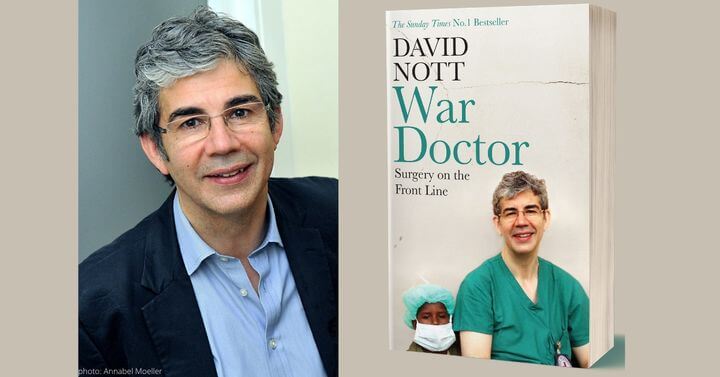 LIVE ONLINE 3.00pm – 4.00pm Sunday 25 October
David Nott will take questions from our online audience during the live event – simply type your question into the Q&A box under the live feed.
If you are unable to watch the live-streamed Literary events, the recording of each Literary event will be available to view online from the following day, using a viewing token, until midnight 7 November.

For more than twenty-five years, David Nott has taken unpaid leave from his job as a surgeon with the NHS to volunteer in some of the world’s most dangerous war zones. From Sarajevo under siege in 1993, to clandestine hospitals in rebel-held eastern Aleppo, he has carried out life-saving operations and field surgery in the most challenging conditions. The conflicts he has worked in form a chronology of twenty-first-century combat: Afghanistan, Sierra Leone, Liberia, Darfur, Congo, Iraq, Yemen, Libya, Gaza and Syria. He has also volunteered in areas blighted by natural disasters.

Driven both by compassion and passion, the desire to help others, and the thrill of extreme personal danger, he is now widely acknowledged to be the most experienced trauma surgeon in the world. Since 2015, the foundation he set up with his wife, Elly, has disseminated the knowledge he has gained, training other doctors in the art of saving lives threatened by bombs and bullets.

David Nott will be in conversation with Stewart Collins.

‘David Nott is brave, compassionate and inspiring – War Doctor is all of those things and more: a wonderful book that has left me in floods of tears. He needs a knighthood and his book needs to be in every house.’
Adam Kay, author of This Is Going to Hurt