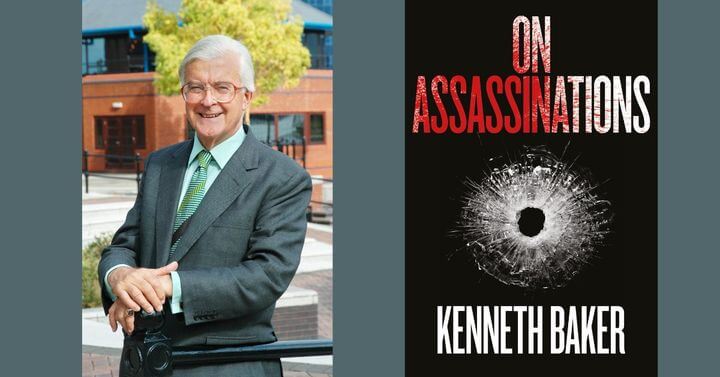 LIVE ONLINE 12.00pm – 1.00pm Saturday 31 October
Kenneth Baker will take questions from our online audience during the live event – simply type your question into the Q&A box under the live feed.
If you are unable to watch the live-streamed Literary events, the recording of each Literary event will be available to view online from the following day, using a viewing token, until midnight 7 November.

Former Home Secretary, Kenneth Baker takes a historical perspective on assassins and assassinations ranging from Julius Caesar to President Kennedy to Osama bin Laden. In his view assassins hope to change the world, but rarely succeed, the killing of Franz Ferdinand in Sarajevo in June 1914 being arguably the only one that changed the history of the world. Other assassinations, whether of monarchs, politicians, dissidents, clerics or journalists at best give a glancing blow to history. On Assassinations also shows how we have moved from the era of individual assassinations, through to terror groups’ murders and now onto state-sponsored targeted killings.

Kenneth Baker, Lord Baker of Dorking CH, is a British politician and a former Conservative MP, having served in the Cabinets of Margaret Thatcher and John Major as Environment Secretary, Education Secretary and Home Secretary. He has previously written five poetry anthologies, five books on the history of cartoons including George III: A Life in Caricature and George IV: A Life in Caricature, his memoirs, The Turbulent Years, and most recently On the Burning of Books and On the Seven Deadly Sins.