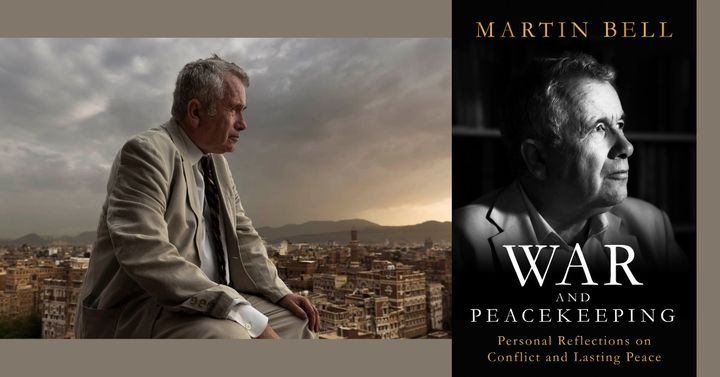 LIVE ONLINE 7.00pm – 8.00pm Friday 30 October
Martin Bell will take questions from our online audience during the live event – simply type your question into the Q&A box under the live feed.
If you are unable to watch the live-streamed Literary events, the recording of each Literary event will be available to view online from the following day, using a viewing token, until midnight 7 November.

Providing the journalistic perspective to the experiences of ‘War Doctor’ David Nott (Sunday 25 October) acclaimed broadcaster Martin Bell confirms that there are no winners in war, only losers.

Over six decades, Martin Bell has stood in eighteen war zones – as a soldier, a reporter and a UNICEF ambassador. In War and Peacekeeping he looks back on our efforts to keep the peace since the end of the Second World War and the birth of the United Nations peacekeeping mission in the new State of Israel. From the failures of Bosnia, Rwanda and South Sudan to nationalism’s resurgence and the phenomenon of ‘alternative facts’, Bell calls for us to learn from past mistakes before it’s too late.

Martin Bell is both a former BBC war correspondent and a former MP. His previous books include War and the Death of News, Through the Gates of Fire and An Accidental MP. The much-loved ‘man in the white suit’, he is a UNICEF Goodwill Ambassador.

Martin Bell will be in conversation with Stewart Collins.