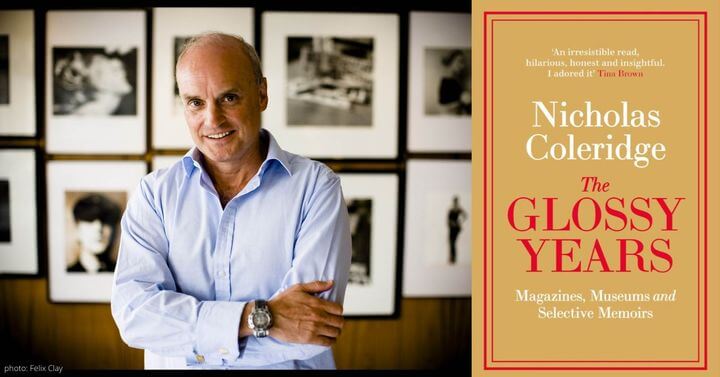 LIVE ONLINE 12.00pm – 1.00pm Monday 26 October
Nicholas Coleridge will take questions from our online audience during the live event – simply type your question into the Q&A box under the live feed.
If you are unable to watch the live-streamed Literary events, the recording of each Literary event will be available to view online from the following day, using a viewing token, until midnight 7 November.

‘The autobiography of magazine kingpin Nicholas Coleridge is a Waugh-like whirlwind of eccentric characters, lavish parties and even a spell in a Sri Lankan jail. It is funny enough to excuse all the name-dropping’ Evening Standard, Books of the Year

This will be a whirl of a lunchtime event! Over his thirty-year career at Condé Nast publishers, Nicholas Coleridge has witnessed it all. From the anxieties of the Princess of Wales to the blazing fury of Mohamed Al-Fayed, his story is also the story of the people who populate the glamorous world of glossy magazines. With relish and astonishing candour, his memoir – The Glossy Years – offers the inside scoop on Tina Brown and Anna Wintour, David Bowie and Philip Green, Kate Moss and Beyoncé; on Margaret Thatcher’s clothes legacy, and a surreal weekend away with Bob Geldof and William Hague. Cara Delevingne, media tycoons, Prime Ministers, Princes, Mayors and Maharajas – all cross his path.

Nicholas Coleridge’s career in magazines straddles the glossies throughout their glorious zenith – from the 1970s, 1980s and 1990s to the digital iterations of the 21st century. Having cut his teeth on Tatler, and as Editor-in-Chief of Harpers & Queen, he became the Mr Big of glossy publishing for three decades.

Nicholas Coleridge will be in conversation with Douglas Rae.