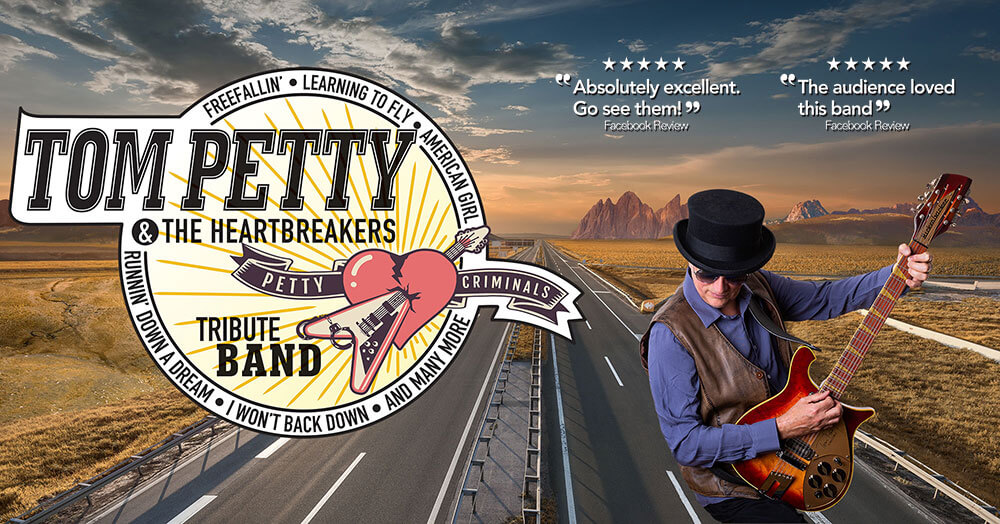 Although Tom Petty is no longer with us, the UK and Europe’s top Tom Petty and The Heartbreakers tribute band, Petty Criminals, are keeping the music alive and performing his great songs in theatres and clubs to great reviews.

Petty Criminals make every effort to authentically recreate the sound and stage show of a Tom Petty and The Heartbreakers concert, including using authentic equipment, similar to that used by The Heartbreakers, including Rickenbacker guitars, Fender valve amplifiers and a Hammond organ.

During a 2+ hours show they perform the greatest songs of Tom Petty and The Heartbreakers. The performance will include early songs that brought Tom Petty to the attention of the world, such as American Girl, Breakdown & Refugee, through the ‘80s and early ‘90s with classics like The Waiting, Don’t Do Me Like That, Freefallin’, Runnin’ Down A Dream, I Won’t Back Down & Learning To Fly. Also highlights from the seminal album “Wildflowers” and his later albums. The show will also include the best songs from his time with The Traveling Wilburys, such as Handle With Care and End Of The Line, and duets with Stevie Nicks, such as Stop Draggin’ My Heart Around.

A Petty Criminals show is an unforgettable tribute and musical journey through the life and works of one of the greatest and much missed rock stars of our time – Tom Petty, and his legendary band The Heartbreakers.

The Tour Promo video can be viewed at –

Facebook Quotes –
***** “We thought you were superb. Having seen Tom Petty a few weeks before he died we can say how accurate your tribute is. Looking forward to seeing you again!” – Dennis O’Gara.

***** “Petty Criminals are absolutely brilliant! These guys are completely professional. They sound so authentic and look the part. Covering all the big hits and the lesser known songs. All with a Great stage show and real presence. If you’re looking for a tribute act – look no further. They are the best.” – Marc Smith.

***** “Petty Criminals smashed the evening and rocked the audience with some pretty or should I say Petty special covers of this great band Tom Petty and the Heartbreakers! The attention to musical detail was superb – the musicianship first class but oh those backing vocals and harmonies took the songs and tribute to another level. These guys picked up that the Heartbreakers didn’t just rock with the hardest but vocally harmonised with the best be that Howie or Scott. The crowd were bouncing and as a lifelong TPHB fan I would recommend you hear and go see these guys for a brilliant night and soak up Tom Petty’s great songwriting legacy!” – Terry Phillips.

***** “Absolutely excellent and made me revisit Tom Petty material which seems to have passed me by previously. Go see them – a very tight band.” – Dave Millner.

***** “Great gig, great musicians. What more can you say other than brilliant”. – Bob Hitner.