Rock n Roll at its Finest in Worthing 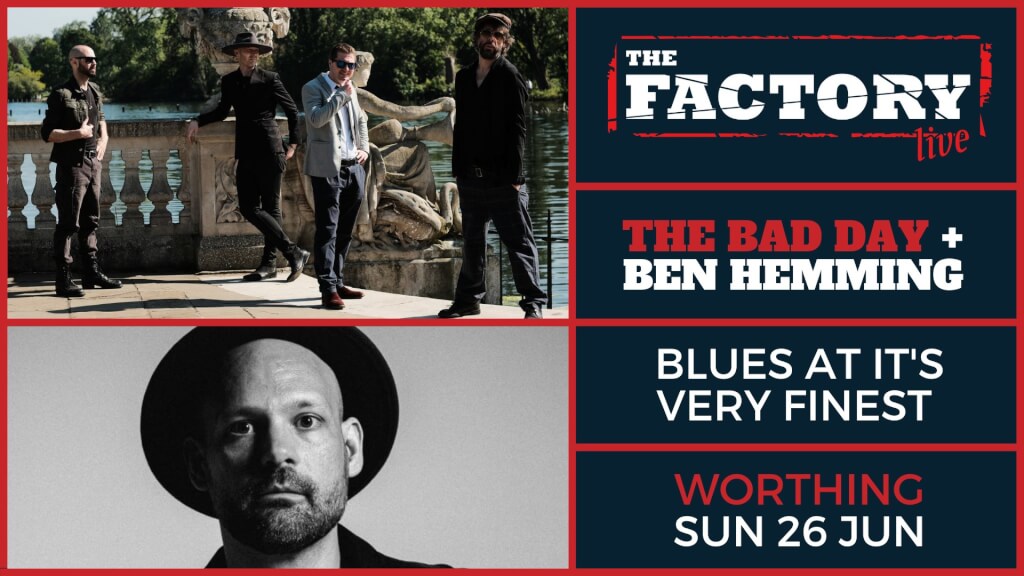 Rock n Roll at its Finest in Worthing

“A group certainly on the rise, doing what they do best!” London Live TV

1st Round 2022 Grammy Awards for debut studio album – Table by the wall.

​Exciting modern Rock n Roll at it’s finest, The Bad Day exploded onto the scene in 2017, playing Times Square, New York City with double Grammy Award winner Delbert McClinton. This amazing show was then followed by two critically acclaimed performances at The Isle Of Wight Festival in both 2018 and then again in 2019.

​The Bad Day have played alongside artists such as The Killers, The Manic Street Preachers, Craig David, Starsailor, Badly Drawn Boy, Delbert McClinton, George Ezra, Cheryl Crow and many many others. Quite a feat when you consider they have only been together since 2017. You never quite know where there performance will lead to, including harp and guitar duals or screaming and shouting catchy chorus lines.

Major international radio play by BBC Radio 2 (UK), Planet Rock Radio and Radio Rock (Brazil) helped the group establish themselves as one of the world’s most exciting blues-rock prospects.

Featured in international mainstream media such as Classic Rock Magazine, HRH Magazine, Bassplayer magazine (US and UK) and many others.

Television interviews on U.K mainstream channels; London Live TV, SKY and Virgin have teased as to what may come from the group. They are naturals in front of the camera as well as on stage, with an engaging, cheekiness about them.

​2022 promises to propel the band even further into the rock n roll stratosphere with shows confirmed for Love Rocks Festival, Wildfire Festival, Brezoi Open Air Blues Festival, STMS Festival and many more to be announced!

The energy, charisma, songwriting and musicianship blended into one volcanic performance that you will not forget! The Bad Day are a band of brothers, fighting the good fight to bring new, raw, energetic Rock n Roll to the world!

Support from Ben Hemming
In something of a backward nod to the ways of a bygone era, its fair to say that Ben Hemming didn’t so much find the blues… as the blues found him.

It was during a particularly troublesome period in his life, stuck in a dead end job, and having watched his girlfriend walk out of his life, that he decided the only option was to seek change. Big change. Leaving all of his emotional baggage behind, he embarked upon a musical pilgrimage around America that eventually would come to define not just his sound, but also his own identity.

Since that day he has never looked back, having toured Europe and America several times since, released four albums, his latest ‘Broken Road’ released last year, and received critical acclaim; The Blues Magazine called him ‘A unique musical identity’; Blues Blast Magazine described his songs as being ‘of bleak beauty’ and Americana U.K. placed him at the forefront of the so-called ‘new Blues’ movement.