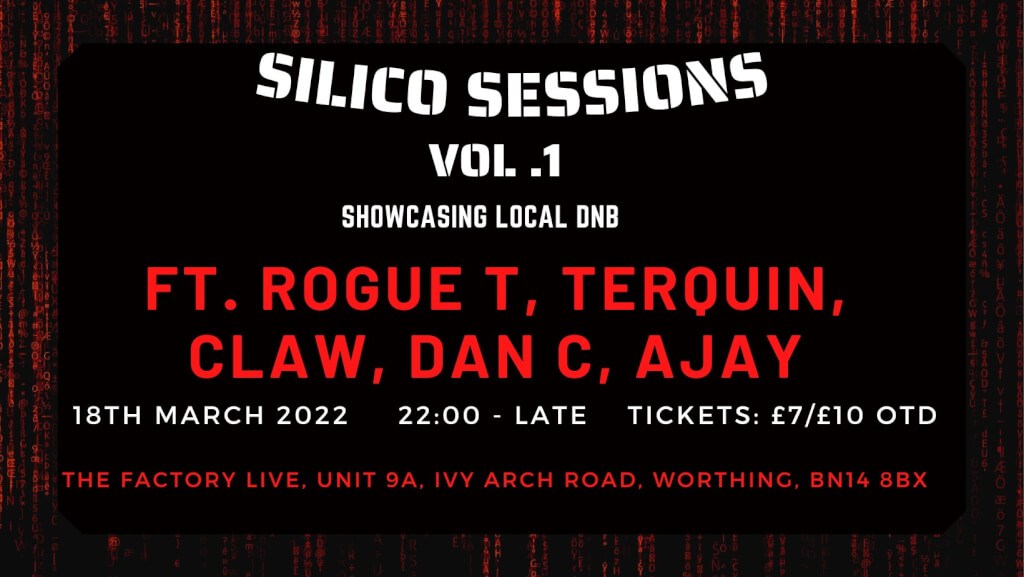 The Factory Live presents Silico Sessions (Vol. 1). Huge basslines and heavy rollers in Worthing for a ‘not-to-miss’ late-night event brought to you by:

High intensity, fierce energy and a euphoric atmosphere are all things to expect when Worthing based CLAW navigates the deepest parts of the UK jungle sound, accompanied by harmonic vocals that embrace you into the whole experience.

Fans familiar with the local scene may have caught his set on Raw DnB, which is nothing short of what is to come from this hungry up and coming talent. If you’re not there you’re missing out!

Taking inspiration from artists such as Hedex, Kings Of The Rollers and Turno, Worthing based DnB act AJAY spent most of 2020 perfecting his own unique style which includes all the best elements of Rollers, JumpUp and Breakbeat blended into the purest levels of filth all together creating the AJAY experience.

A true fan of everything DnB, AJAY uses his love of everything from the moshpits to the melodies in order to provide a live show like no other witnessed in the local scene that he has been a part of through the thick and thin and now feels it’s time to give back in the form of musical mayhem.

Popular from his extensive mixes on SoundCloud and well-practised DJ skills in the scene, Somerset based DAN.C is ready to pack a punch and is definitely not a set to miss.

Building on over 10 years of DJ experience and also delving into the realms of music production, he has a simple aim – taking ravers along on a high-paced musical journey they won’t forget in a hurry…

DAN.C is sure to have everyone bouncing with his wide range of track selections. Leaving no stone unturned and bringing you everything from the classic dubs to the latest filth, DAN.C is sure to leave you needing a breather.

Rogue-T is no stranger to the decks as well as playing up and down the country at some of the best venues in the UK. He also has played on many radio stations such as Flex.fm, Trickstar radio, Unity, Vibe radio and many more online radio stations.

Rogue-T is currently doing a monthly radio show on Rough Tempo with Reddeye. In 2017 Rogue-T started his own label RAWDNB which has had many artists come through the ranks to deliver some incredible projects. Rogue-T is currently working on his debut album with a number of massive collabs on the way, more info coming soon.

Terquin, also known as Ollie Reed, is an upcoming DJ/Producer from Shoreham who is into a wide range of dance music and wants to show what he brings to the scene.

He has played at venues in Brighton, Worthing, Austria, Thailand, Zante and many more! He loves performing and feeding off the energy from the crowd!