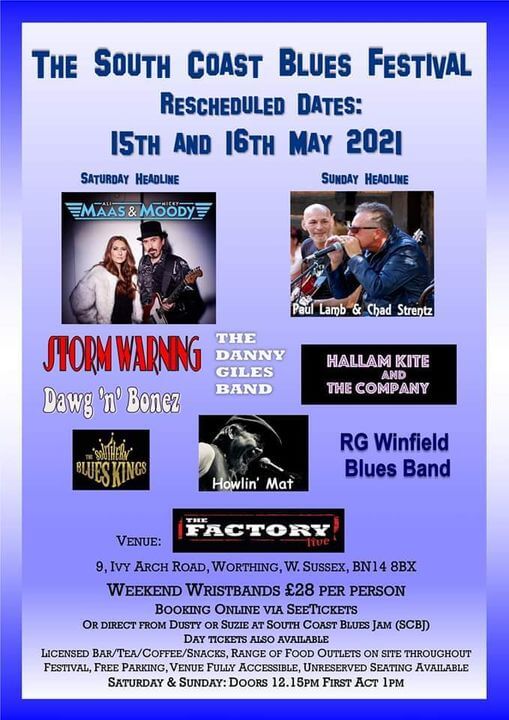 Rescheduled from May 2020 due to the Covid-19 global pandemic, the South Coast Blues Jam team presents two fantastic afternoons and evenings of Blues on the South Coast of England, brought to you by an amazing line-up of big names and local bands, all ready to entertain with an array of blues styles from laid back, old-fashioned harmonica and guitar solos to Blues Rock, via a bit of good ‘ol stomping, courtesy of Howlin’ Mat.
Weekend Headliners Micky Moody and Ally Maas, and Paul Lamb and Chad Strentz, are also joined by several other Blues-based artistes for your entertainment, including The DBG, Storm Warning, The Southern Blues Kings, Hallam Kite and the Company, Dawg ‘n’ Bonez, and The Richard Winfield Blues Band.
Food stalls, a fully stocked bar, cabaret style seating and disabled friendly facilities at our fantastic venue await to make it a Blues weekend to remember!

FURTHER INFO:
ALI MAAS & MICKY MOODY
Micky Moody and Ali Maas with their five-piece band playing their very own brand of blues, rock, Americana, swampy rhythms and captivating melodies. Their first album, Black and Chrome, was released on the Armadillo label in 2016. With Micky’s pedigree extending from bands such as Whitesnake to Juicy Lucy and Snafu you can certainly expect some vintage classics too. Their second album due for release in 2020, they love nothing better than playing their music live and enjoying a festival atmosphere, so they are really looking forward to this one! The band is completed by Micky Moody Jnr on drums, Ollie Parfitt keyboards and Stuart Dixon on bass.

PAUL LAMB
Hailed by aficionados and music press around the world as Europe’s foremost blues harmonica player, Paul Lamb has forged a place in the history books as one of the greatest players of our time. He has won countless awards, sold record-breaking quantities of albums, and performed the world over with his longstanding musical compatriots The King Snakes. Inducted into the British Blues Awards Hall of Fame (alongside the likes of Peter Green, John Mayall & Alexis Korner) Lamb continues to bring his infectious brand of blues to a plethora of fans around the globe.
CHAD STRENTZ
There’s a whole deal of experience behind vocalist and rhythm guitarist Chad Strentz. Billed as one of the best Blues singers in Europe, Chad started out as a rockabilly hound at the age of 15. He enjoyed success on this circuit in the U.K. and Europe. In 1991 he got together with Paul Lamb & they toured extensively with The King Snakes and released over 5 CD’s to much acclaim. During a sabbatical in 1999 he formed Breakout Blues with his old friend Pete Farugia. His next venture was the with Big Town Playboys who released the album “Roll the Dice” featuring Jools Holland, Jeff Beck and Robert Plant. He re-joined the King Snakes in 2003 and has been touring and recording with them to date.

HOWLIN’ MAT
Howlin’ Mat is every inch the blues man and is one of the hardest working solo blues acts around both in the UK and abroad. He is a nationally acclaimed slide guitarist and has also established himself as one of the top cigar box guitar players on the UK Blues circuit. He wrings every ounce of passion out of his guitars to bring you his real-life tales of cheap hotels, too much alcohol, late nights and fast food. You will know that this is no fancy fair with the rough edges all polished and made squeaky clean but the real raw roots deal. Check him out at www.howlinmat.co.uk

THE DGB (DANNY GILES BAND)
“THE DGB are a blues-rock tidal wave” Pete Feenstra – getreadytorock.com/classic rock magazine U.K. The DGB is a marriage of classic and modern musical values; tipping its hat to the past, living in the present and looking towards the future – combining great songs, a great sound and stunning musicianship, all wrapped up in a modern formula. The trio of Danny Giles (Guitar & Vox), Pat Garvey (Drums) & Jon Chase (Bass) bring you their brand of full-blooded rock with a twist of blues, gospel and soul, spiriting a no-nonsense attitude & paying very little, if any attention at all to any of the boundaries placed before them.

THE SOUTHERN BLUES KINGS
Band Members: Tony T Bone Bell – Guitar/Vocals. Terry Mabey – Drums. Jim James – Blues Harp/Vocals. Tomas Siroky – Bass.
Hailing from Eastbourne, East Sussex, The Southern Blues Kings are influenced by West Coast Swing / Jump and Chicago Style Blues. This style of music draws its influence from the Big Bands of the 1930’s and 40’s and the Chicago Blues masters. With Terry on drums and Tomas on double bass providing a solid Foundation and “Engine Room” for the Band, it gives Tony and Jim the freedom to express their virtuosity, of which they have plenty! The Boys provide an energetic mix of up-tempo material, suitable for Blues lovers, Jivers, Lindy Hoppers, Toe Tappers and Listeners alike. They might throw in the occasional mellow number which will allow you to catch your breath…….but then you’re off again!

THE RG WINFIELD BAND, DAWG ‘N’ BONEZ, HALLAM KITE AND THE COMPANY
Three locally based blues bands that all came about through the camaraderie and networking of the South Coast Blues Jam, each with their own individual styles and take on the blues.

THE SOUTH COAST BLUES FESTIVAL 2020
The South Coast Blues Festival 2020 has been put together to showcase UK South Coast Blues talent, including bands formed through meeting at the SCBJ, as well as to bring some well-known established acts to the Factory Live and the town of Worthing.
Ally Maas is from Horsham originally, others are from a little further inland, and although Paul Lamb and Chad Strentz are not local to the south of the UK, we are very excited they want to come and support us in our first weekend festival. The Blues community is a friendly one!

SOUTH COAST BLUES JAM (SCBJ)
The South Coast Blues Jam is a regular FREE event, always 2-5pm on 3rd Sunday of every month. Open to all Blues performers and fans. PA system, back line and house band are provided, players need only bring instrument / sticks / voices. Venue is The Factory Live, Ivy Arch Road, Worthing. All comers welcome, it is our policy to make sure everyone gets up at least once, if they want to.
South Coast Blues Jam started at Bar 42 in November 2012 with Dusty Bones, Suzie Harvey, English Tea and Mike Cissbury and some very supportive friends in the audience.
It grew steadily and moved on via a variety of venues in the area, finally settling in July 2019 at The Factory Live, a purpose built 300-capacity venue in Worthing. We now regularly have around 50-70 attendees each month at the jam.