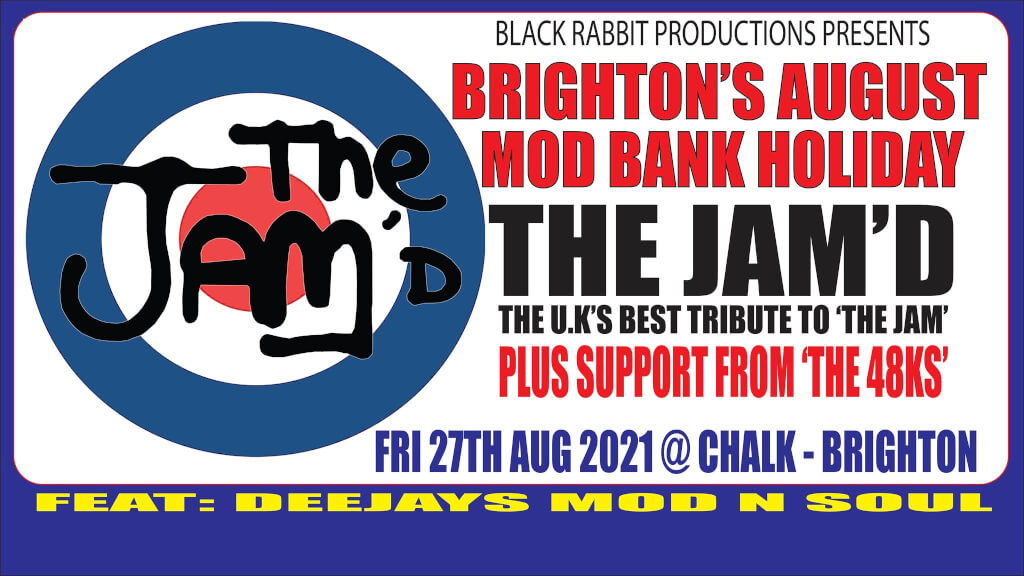 The Jam’d are now the UK’s best known and most popular tribute to the live performance and sound of The Jam, and are totally committed to giving an unforgettable, authentic performance with all the energy, passion and style of the Woking 3.

As full time touring professional musicians, and massive Jam fans, the band don’t “try to be” or “pretend to be” The Jam, but rather put on a performance from the heart and soul, drawing on all their memories, experiences and love of what was the country’s biggest band in their day.

Gigging up and down the UK at outdoor festivals, scooter rallies and some of the UK’s top music venues & events! The show also includes the only replica of Rick Bucklers ‘Great White’ drum kit & features their own brass section!……You won’t be disappointed!

Every effort is placed into reproducing the sound, arrangements and energy of a Jam gig. Those who saw The Jam live will remember the electricity, aggression, passion, and even fashion on stage, something not always prevalent in today’s world, but to The Jam’d, it is a passion, a mission, and an honour to play for fans of “the best band in the f#@*ing world!”

“You had to have seen The Jam live to truly experience what a Jam gig was, and I was lucky enough to have seen them on quite a few occasions. It wasn’t jumping around in every song on stage, it was a feeling, a movement, a total experience of style, cool, tension, excitement and electricity! We try and put those experiences into our performances to give our audiences some idea of what a Jam gig was. No one can ever emulate The Jam, but we hope we go some way to reminding fellow Jam fans of the best days of our youth!”
Dave Fletcher (The Jam’d)

BBC Radio 4 – The Jam’d can play any of the classic songs perfectly! They know what they’re doing!

The 48k’s have played various venues throughout the country, entertaining with their own brand of Indie/Mod.
Venues such as the Leadmill, The Plug, The 02 academy, The Cavern, Doncaster Dome and various festivals have seen The 48k’s gain numerous followers and lovers of their music.
Their popularity has led to numerous support slots with prestigious artists such as Cast, Space, The View, Reverend and the Makers, The View, The Selecter, The Strypes, The Hoosiers, From The Jam amongst others.
Acoustic slots also with John Power, Tom Hingley, Chris Helme have also shown the diversity of the songs The 48k’s have written.
The 48k’s released “For Every Day a Memory” which was a collection of their early recordings and followed this up with the release of a 4 track e/p “The End’s The Start Where We begin ” in 2016 to rave reviews.

2019 sees the release of ‘Every Whisper Has A Voice’ arguably their best work to date and a full year of gigs and festivals means they have no intention of slowing down.