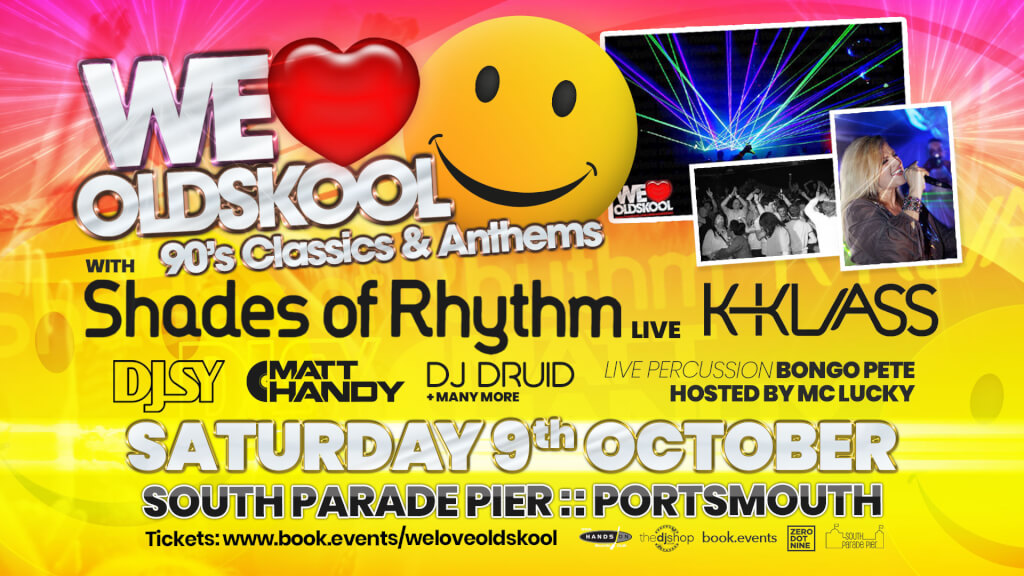 A huge night of oldskool classics and anthems from the 90’s. With a great line up of artists and our biggest event production to date.

With so many classic tunes under their name ‘ Sound Of Eden’, ‘Sweet Sensation’, ‘Armageddon’, ‘Extacy’ to name just a few. This English based electronic dance music group have been an integral part of the dance music scene from the late 1980s to the present day.

Check out their great live performance and exclusive interview at one of our last events.

K-Klass are responsible for some of the biggest house tracks ever made. K-Klass had already gained underground support for their acclaimed “Wildlife E.P”, released in 1990 before they unleashed their sound onto a nationwide audience with the release of “Rhythm is a Mystery” (No.3 in U.K.Top 40) and the huge”Let Me Show You” (No.13 in U.K.Top 40)

They have worked alongside most of the biggest and most established artists around, some of these include: The Pet Shop Boys, Kathy Brown, Shake Down, Whitney Houston, Gerri Halliwell, Blondie, Bobby Brown, M-People, Level 42, Kylie Minogue, Rozalla, Sunscreem, Frankie Knuckles, Bizarre Inc, Kathy Sledge, New Order, Janet Jackson, Luther Vandross, Lisa Stansfield and Candi Staton plus many many more.

Sy started DJing professionally in 1989 aged 21 playing hip-hop, soul and house and he gained a residency at a nightclub called Venus in Nottingham in 1990 whilst at university. Following this success he was booked at events all over the Midlands, such as Nemesis Leicester, Amnesia Coventry, Time in Birmingham and the legendary Eclipse.

Having gained a name as a DJ with a style of mixing that was unique to the newly-born rave scene, other promoters such as Dreamscape, Helter Skelter, Obsession, Fantasia and Perception included Sy on their line-ups. Club work all over the country and abroad helped to establish his reputation as the Scratchmaster.

Matt started playing with Decks and Dance music at the age of 13 in 1987 on his Dad’s very primitive turntable. From then on, he has been DJing constantly since 1993, put on events since 1994 and run his record shop Hands On since 1995.

What started a hobby and passion in his early teens has now developed into spending all his life within the music industry and gone onto having rocked 1000’s of dance floors everywhere he plays over the last 28 years in some of the best clubs in the UK and abroad across many styles of music we love.

Legendary DJ Druid has been part of this music scene since the very beginning releasing countless records on labels such as Hectic, Fusion, Bonkers, Rabbit City, Force Mass Motion and more. He has played on lots of massive events all over the country back in the 90’s and always delivers a great set. Expect lot of Oldskool Classics from 1989-1995!!

Bongo Pete has been gracing dancefloors since the very early 90’s with his bongo rhythms. Playing alongide many top DJs and at lot’s of legendary events. Sunnyside Up, Spooky, Ibiza and many more. He has been a big part of the South Coast and London club scene throughout the 1990’s and always adds a bit of extra magic.

MC LUCKY legendary MC from back in the early days of Sterns, Central Park, Empire and many more great clubbing milestone events. He hosted alongside lots of the top DJs in dance music from Carl Cox, Grooverider, LTJ Bukem, Mr C, Top Buzz, Colin Dale to Ratpack and many more. Luck Luck Lucky on the MIC!!

Look out for some more top artists to be announced for a very special line up and stay tuned for giveaways and competitions over the coming weeks on the WE ♥ OLDSKOOL pages.

♦ Our Biggest Event Production Ever, Extra sound, and Effects

♦ State of the art LIGHTING

(Subject to booking fee at some outlets)

18+ PHOTO I.D WILL BE REQUIRED ON ENTRY

(NO RE-ENTRY AFTER ADMISSION)

ALL OUR LAST EVENTS HAVE SOLD OUT!!
THIS WILL BE BY FAR THE BEST ONE YET!!

Note: Government guidelines will be adhered to and should the event not take place on the scheduled date it will be rescheduled to a later date and all tickets will remain valid for any future date or refunded.